Behind the scenes of language rights nonprofit Wikitongues
Sign up for Airtable for free
July 13, 2016
Part two of our deep dive with Wikitongues, a nonprofit aiming to document every language in the world.

Just joining us? Check out part one of the Wikitongues story here.

With their carefully curated language resource established, the Wikitongues team expanded their use of Airtable to encompass the management of their most vital projects and ongoing initiatives. As a growing organization, they faced the operational challenges experienced by many nonprofits: they needed to take a streamlined approach to volunteer management, program delivery, content production, and partnerships that would adapt to their ever-changing needs — all without burdening their budget.

Building a visual catalog of videos

The centerpiece of the Wikitongues cultural and linguistic archive is their treasure trove of short videos that feature speakers and signers talking in every language. To maintain and expand their collection, making it easy to manipulate, search, and use for their increasingly ambitious projects, the team has developed an extensive and carefully managed catalog in the ‘Videos’ table of the Wikitongues Airtable base. 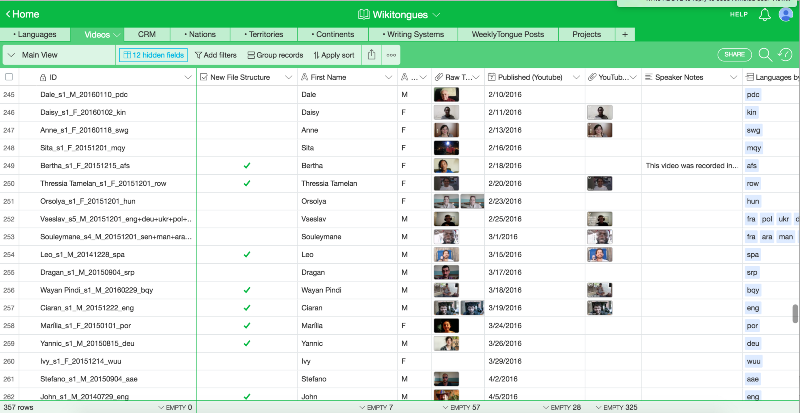 All the videos are recorded and provided to Wikitongues by a group of volunteers who live around the world. To make it easy for their contributors to provide all the information necessary to add a new video to the catalog, the Wikitongues team generated an Airtable form from their ‘Videos’ table. This automatically created a corresponding blank on the form for every field in the ‘Videos’ table. Some of those fields, like URL and publish date, are not pertinent to the contributors uploading new videos, so to avoid confusion, the team removed those fields from the form before sharing it with their volunteers. 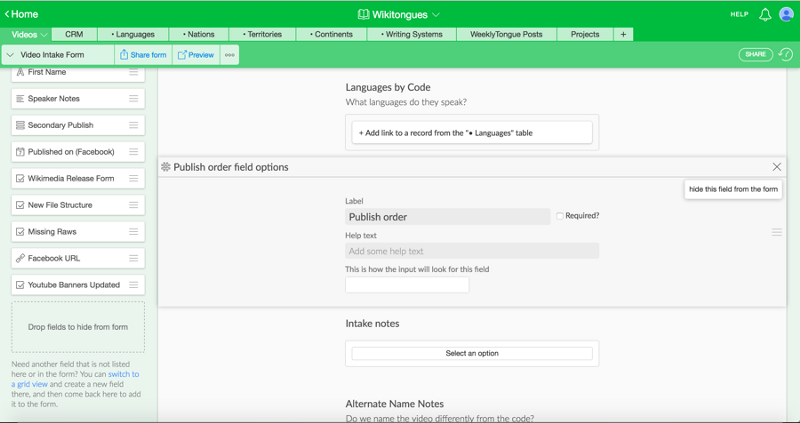 It’s easy to remove a field by clicking the x in the top right corner of the field.

Tracking down the actual location of the video — it can end up stored locally on one of the two founders’ laptops, or in a cloud service such as MediaFire — is a necessary prerequisite to posting. The ‘Missing files’ view creates a quick shortcut for the team to find those videos that could cause problems prior to posting. By filtering on the ‘File accounting’ field to identify uncertain (empty) or definitely missing files, they can identify potential issues with a video file’s location in advance of its scheduled posting date.

The team keeps an eye on the video posting queue via a “Publish order’ view that’s filtered to display only videos that haven’t yet been posted, and then sorted by anticipated publication date. 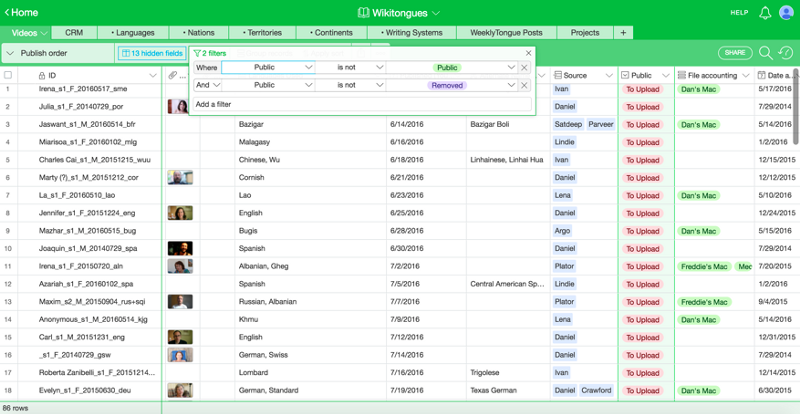 To get a better sense of how the different posting dates relate to each other, both historically and over the course of the coming months, the team has created a calendar view. 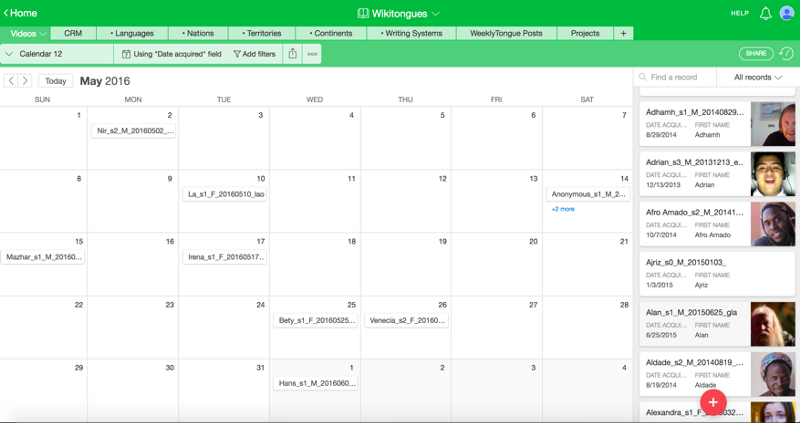 Airtable displays cards for the records that don’t have a date in the field chosen to generate the calendar. This means that when a member of the team needs to schedule a new video, they can easily drag the cards in the right sidebar directly onto the date of their choice, or adjust already scheduled cards if a conflict comes up.

When it comes to the social media posts that promote their new videos, the Wikitongues team once again turns to carefully crafted views which hide, filter, sort and rearrange fields to place pertinent elements, such as whether the raw file (which will need to be uploaded separately to Facebook) is missing, or the video thumbnail that will need to be manually added into the Facebook posting interface. 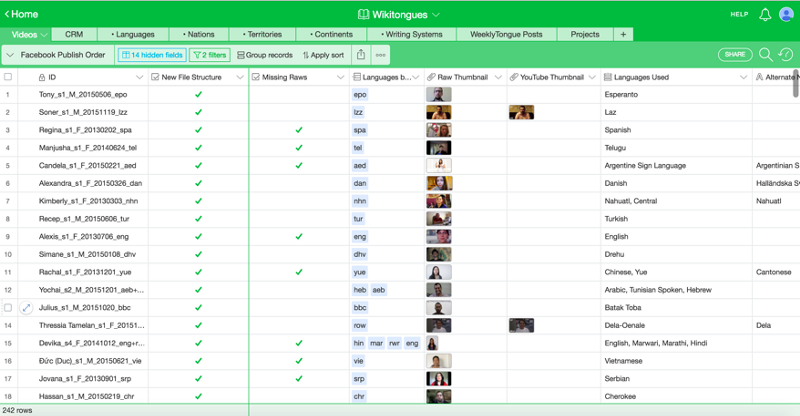 As a globally distributed project headed by a very small core team, Wikitongues needs a way to track the contact information and involvement of their dozens of contributors around the world. 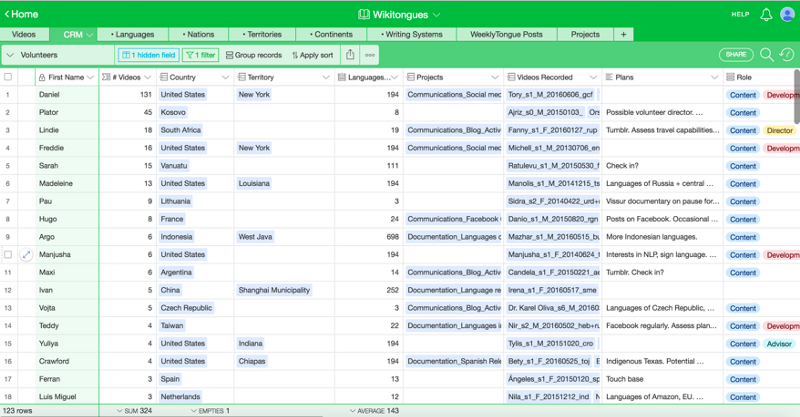 Each individual volunteer can ultimately upload a large number of videos, so the team uses the data in other linked tables to identify the languages each volunteer might be able to collect in their home region. By maintaining the links between these contributors and their corresponding country and territory tables, the team can instantly quantify the size of the video opportunity by using a count field. 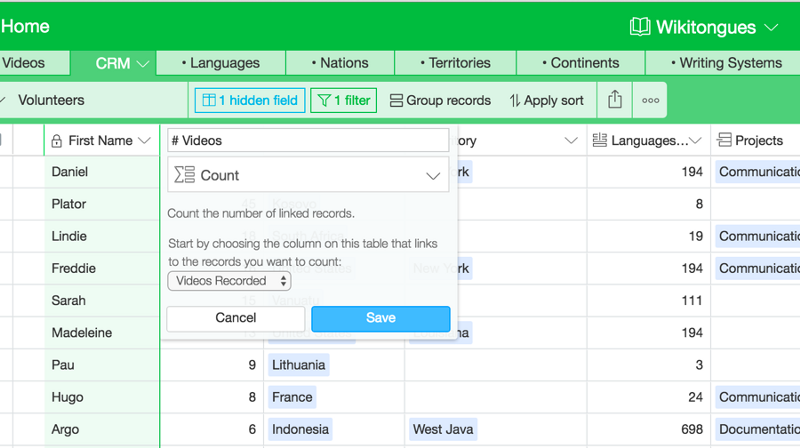 Of course, the relative number of potentially available languages is only one part of the puzzle: contributors regularly record multiple videos for each language, particularly when that language is less widely spoken around the world. For example, in the case of Plator Gashi, a top contributor from Kosovo, there are eight distinct languages that could potentially be collected in his nation. To date, Gashi has recorded 45 different videos, only two of which actually feature himself.

The CRM table also connects each volunteer to the videos they have recorded and the projects in which they are involved. In addition to their regular cadence of video collection and posting, the team embarks on a number of special projects, ranging from expanding their Twitter following and building out a Facebook video presence comparable to their YouTube channel to fulfilling the different rewards for their recent Kickstarter project.

The Wikitongues team, both staff and volunteer, takes a lightweight approach to project management: they’ve created a streamlined project dashboard to showcase all the inflight projects for each of their departments. In this ‘Projects’ table, each unique project gets its own record, including links to the volunteers and employees working on the project, its title, a brief description, which department it falls under, the current status, and its start and finish dates. 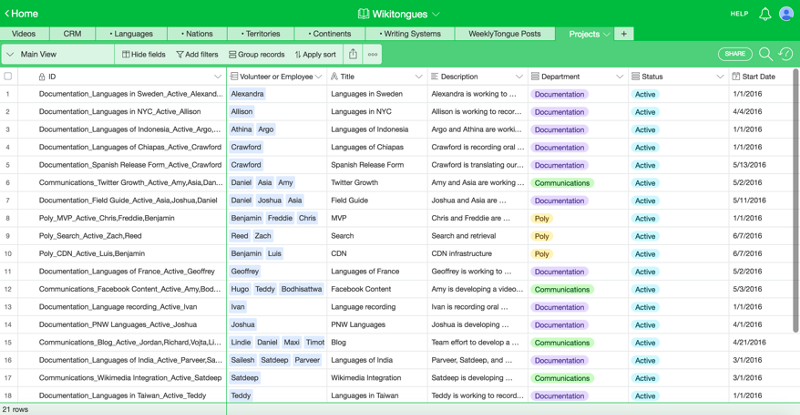 For this table, they configure the primary field as a formula which concatenates several of the fields into a unique ID with a custom format — all without re-entering any information that’s already present in the table. 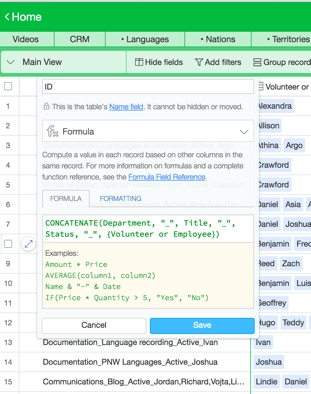 One ongoing initiative at Wikitongues last year was a blog post series called ‘WeeklyTongue.’ For each post, the team selected a language to feature, digging into the background of that language and culture. 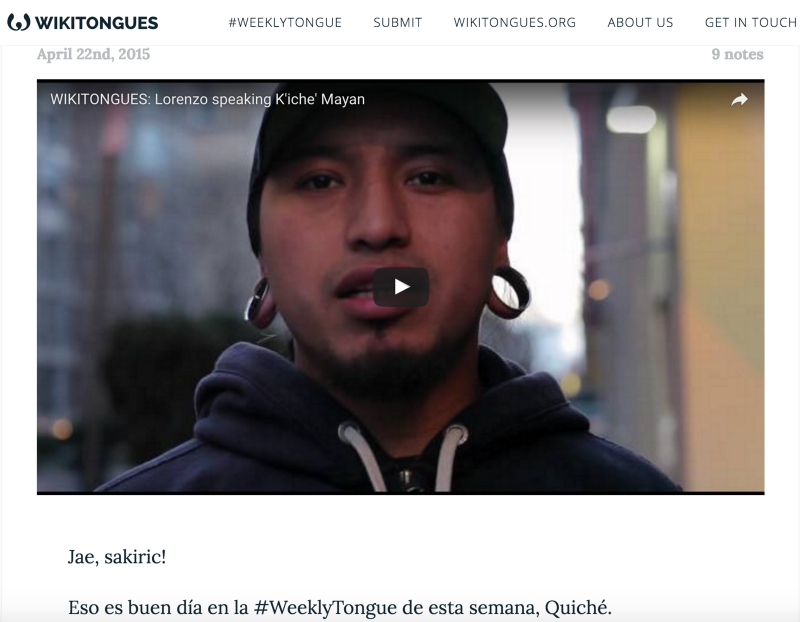 An example of a #Weeklytongue post. Read the whole thing over on the WikiTongues blog

By drawing on the linguistic and cultural context of the language in a concise, easily- digestible format, the team provided yet another entry point for new readers and viewers to join in their efforts to celebrate and advocate on behalf of threatened languages. All of the information included in each post was already aggregated and easily discoverable in their language database, eliminating the need to do extensive research on the language in question and dramatically speeding up the writing process.

To manage the posts themselves, the team used the ‘WeeklyTongue Posts’ table. Each post got its own record, with date, a link to both the subject language and the language in which the post is written, and a link to the final post. 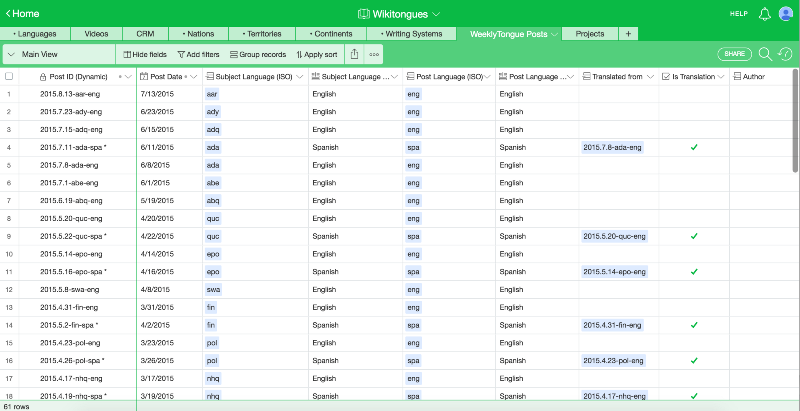 Because the primary field for the ‘Languages’ table which contains these entries is the official ISO code for that language, they used a lookup field to bring in the common name for each. 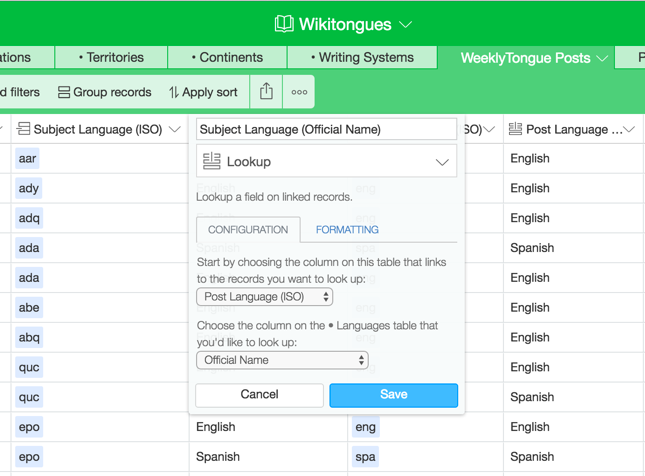 In line with their commitment to linguistic diversity, Wikitongues doesn’t only publish WeeklyTongues in English. For certain entries, the posts are translated in Spanish. To keep a careful record of these posts, they’ve added two additional fields: ‘Translated from,’ a linked record field which connects to the record for the original version of the post, and a checkbox field that denotes if the post is ‘In Translation.’ Using a linked record within the same table for the ‘Translated from’ field makes it easy to bring up the record for the original with a single click.

As Wikitongues continues to expand their operations, they’ve continued to find new uses for Airtable. For the launch of their newest venture, an app called Poly that makes it easy to create and share multilingual dictionaries, they handled granting early access to Kickstarter backers in yet another table. In other tables, they track everything from content resources that can be used for their editorial projects to prospective corporate sponsors, advertising codes to support their partnership with a language learning organization called Italki, and more. In the end, using Airtable allows Wikitongues to evolve without spending valuable cycles finding searching for solutions to the problems that inevitably arise for growing organizations.

More for the record
How WeWork carefully approaches physical space design with Airtable.
How Wikitongues uses Airtable to fight for linguistic diversity.
Power your team with Airtable.